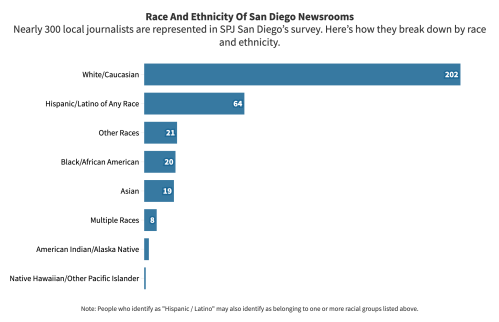 How diverse are San Diego newsrooms?

We finally have an answer to that.

The San Diego Pro Chapter of the Society of Professional Journalists is proud to share the results of our first-ever newsroom diversity survey.

Earlier this year – between February and May – we sent surveys to all local newsrooms in San Diego County seeking the breakdown of their newsroom staff members.

Eleven out of the 20 newsrooms responded. The results represent 288 journalists working throughout San Diego County’s media landscape. While all newsrooms were invited to participate, only one television station responded to the survey.

What did the survey show?

There is a large disparity between the number of Latino or Hispanic journalists employed by San Diego newsrooms — 21.9% — compared to 2019 Census estimates showing Latinos and Hispanics represent just over 34% of San Diego’s population.

There is much work to be done to ensure San Diego’s newsrooms reflect the diversity of the community.

Many of the newsroom respondents agreed — and shared ways they are actively working to improve the diversity of their companies.

Some have since hired additional staff who reflect their efforts to diversify their newsrooms – we encourage news organizations to share their ongoing diversity and equity efforts with us and participate in future surveys conducted by SD-SPJ.

We hope this survey is a baseline from which leaders in San Diego’s journalism community can work to improve the diversity of their newsrooms to ensure fair and accurate reporting of the communities we cover.

We appreciate the responses we received and hope we are able to get more participation in the future. 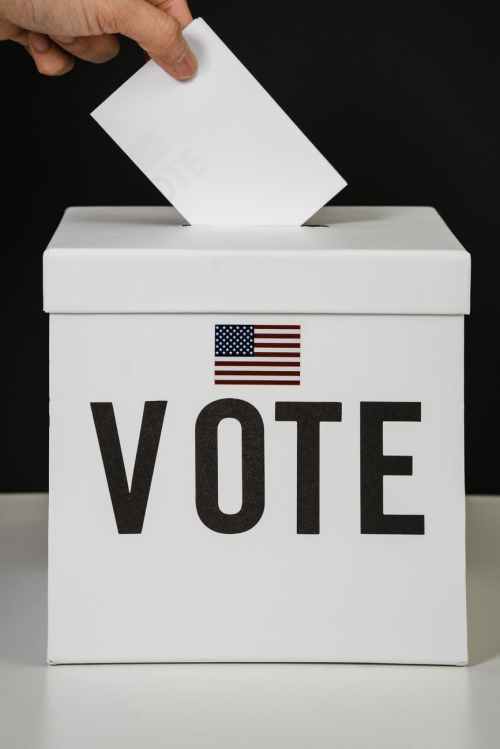 Photo by Sora Shimazaki on Pexels.com

The San Diego Pro Chapter of the Society of Professional Journalists is kicking off its annual board election.

Incumbent board members Bianca Bruno, Matthew Halgren, Lisa Halverstadt, Elizabeth Marie Himchak, Lauren J. Mapp and Arthur Santana are up for re-election this year. You can read about the candidates here.

SPJ members will receive a link to vote via email and should vote by 11:59 p.m. on Friday, June 25. Members may only vote once.

Election results will be announced by early July. If you think you did not receive a ballot and are a current San Diego pro chapter member, please email the board at spjsandiego (at) gmail.com.

Newsroom staffing diversity plays a significant role in ensuring that a newsroom’s coverage reflects the communities it serves.

That’s why the San Diego Pro Chapter of the Society of Professional Journalists (SD-SPJ) is beginning an important project: surveying local newsrooms about staff demographics.

With the support of other local journalism organizations, such as the San Diego Association of Black Journalists and the San Diego chapter of the National Association of Hispanic Journalists, SD-SPJ seeks to compile demographic data from local newsrooms, as well as information on what newsrooms are doing to increase diversity. SD-SPJ has sent requests to all San Diego print, digital, radio and television newsrooms for this information.

We’re conducting this survey to get a snapshot of San Diego’s newsroom demographics, which we hope will provide a benchmark for further research. While nationwide surveys have found that newsrooms are more diverse than in the past, there’s still work to do. For example, a 2019 survey by the Radio Television Digital News Association found that “the percentage of women and people of color in TV newsrooms reached record highs,” but a 2018 Pew Research Center study found that newsroom employees are “less diverse” than U.S. workers overall.

We understand this is a difficult time for many journalism organizations. Still, we feel this survey is timely and can be a valuable resource for newsrooms as the economy improves and hiring returns to normal.

Our plan is to publicly release the data, including a list of all participating newsrooms and a list of all newsrooms we’ve contacted. We will, ideally, hold a virtual event to discuss the findings.

We’ve also asked newsrooms that are unwilling or unable to complete our survey to please let us know why.

You can see the questions we have asked newsrooms to answer by clicking here.

‘Tis the season for giving. Normally around this time of year, the San Diego Pro Chapter of the Society of Professional Journalists would be planning our holiday party for all those working in the media industry in the San Diego region. Due to the pandemic, that’s not happening this year but we want to give back to those in need.

The San Diego Pro Chapter of the Society of Professional Journalists is launching a second round of our Journalist Relief Fund. We’ve allocated $250 for five $50 grants to media colleagues who’ve lost work during this tough year. We know it’s not going to cover things like rent, but we hope the grants will provide some relief.

Those wishing to apply for a grant do not need to be members of SD-SPJ, but they must work (or have worked) in San Diego County. The application deadline is midnight, Dec. 27, 2020. You can fill out the application here.

We are also accepting donations from those wishing to contribute to the SD-SPJ Journalist Relief Fund via our PayPal account so we can do more to help local journalists in need. Donations will be equally distributed to those who receive grants this time around. Please note: Donations are not tax-exempt, but they will go a long way. To donate, click here.

For questions related to the Journalism Relief Fund, email spjsandiego@gmail.com.