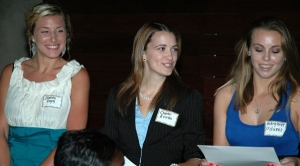 SPJ also partnered with the ACLU of San Diego and Imperial Counties to present the Tom Adler High School Journalism Award, a new annual award established to honor a high school newspaper that has shown, through its publication, a dedication to the cause of civil liberties.

In what may be a sign of the changes in San Diego’s evolving media landscape, this year’s most popular awards contest category was Non-Daily Reporting and Writing, which had 162 entries. The College Media category also had a strong showing with 109 entries.

“We are very pleased that we had such a terrific turnout for the awards contest, especially in these difficult times for journalists,” SPJ-San Diego chapter president Jodi Cleesattle said. “Even in the face of layoffs and budget cuts, we have a lot of truly great journalism to celebrate in San Diego.”

The winners, and judges’ comments, are attached.
SPECIAL AWARDS
Tom Adler High School Journalism Award. This new annual award was established to honor a high school newspaper that has shown, through its publication, a dedication to the cause of civil liberties. The award, which comes with a $1,000 cash prize, is named for Tom Adler, a former ACLU Legal Committee member and board member and a frequent cooperating attorney, in recognition of his legal work to stop censorship of student journalists, and is funded by the Adler Foundation.

The award goes to: The Fallbrook Unified High Schools’ Tomahawk newspaper staff and adviser Dave Evans, for their efforts in challenging the censorship by the high school principal in the fall of 2007 and May 2008 of a student article and an editorial. The article was about the school board’s buying out the former superintendent’s contract for $320,000 after several years of tumultuous relations with teachers, and the editorial expressed two students’ objections to sex education that teaches only abstinence. School newspaper adviser Dave Evans reported the censorship to the school board president, and, in retaliation, the principal removed Evans, canceled the journalism class, and eliminated the school newspaper by turning it into a campus club. The students and their adviser sued the school district in November 2008 after attempts to resolve the issues with the school district failed. The lawsuit continues, seeking reinstatement of the newspaper class and its adviser

Sol Price Prize for Responsible Journalism. This award goes to a journalist whose work not only meets ethical standards but also shows uncommon sensitivity to issues. This journalist pursued truth in the face of such obstacles as unpopularity, economic retribution or physical harm.

The award goes to: Amy Isackson and Vicente Calderon, KPBS, and Tijuanapress.com, for “Border Battle: Bringing Home the Drug War.”

Judges’ Comments: The clear winner. This is an outstanding collection of hard work, notable for its range and sustained quality. The series tackles a huge story without ever resorting to sensationalism or gloss. Well done.

Judges’ Comments: This series of stories is thorough and well-done.

Judges’ Comments: Warth has a well-honed sense of humor evident in his columns. He and Irv Erdos make North County Times an enjoyable read.

Diversity Prize. This award honors either a story or series that provides outstanding coverage of communities that are not usually represented in local media, or an organization that deserves praise for its outstanding inclusion of diverse voices in everyday news coverage.

Judges’ Comments: Berestein’s story on the immigrant beach border point was both poignant and insightful and not a typical immigration story at all. She works hard to take a new look at an old story. Well done.

James Julian Memorial Award. This award is named for the late Dr. James Julian, a journalism professor at San Diego State University who taught media law. It goes to the best community service story or series in a newspaper with a circulation of less than 65,000.

The award goes to: Denis Grasska, The Southern Cross, for “Marines and Families Turn to CREDO for Spiritual Support, Interpersonal Healing.”

Judges’ Comments: Standout profile of an athlete, his motivations on and off the field

Judges’ Comments: Thought-provoking, wide topic range, I enjoyed reading each of the columns

Judges’ Comments: This is an evocative enlightening look at a wall that divides the countries.

Judges’ Comments: This is a terrific headline, especially considering the subject matter and San Diego’s proximity to the ocean.

Judges’ Comments: This is a reader-friendly page that packs in a lot of information in a modern accessible format.

Judges’ Comments: An attractive page with poor art – to the designer’s credit.

Judges’ Comments: A lot of elements, but handled pretty well.

Judges’ Comments: All elements harmonize to tell the story.

Judges’ Comments: Good photos, would have benefited from a tighter edit.

Judges’ Comments: This is a wonderfully conceived and well-executed special section that makes for easy and informative reading.

Judges’ Comments: An easy choice. A fascinating story on the genetics of aging.

Judges’ Comments: An amazing story about a remarkable team. The clear winner.

Judges’ Comments: What’s compelling about this story is the interesting woman artist at the heart of the tale.

Judges’ Comments: Launer’s reviews are as informed and well researched as they are engaging.

Judges’ Comments: Beautiful portrayal of place. Liked the series of photos within the slide show.

Judges’ Comments: Draws the listener entertainingly with teen girl’s recitation of the personal hygiene products she uses, and becomes informative report on possible effect of chemicals on teen hormones.

Judges’ Comments: Articulate observations in a conversation about a new zombie film and its veteran director

Judges’ Comments: Well-done use of sound in a story about undersea sound!

Judges’ Comments: Good on-the-ground view of the food bank ambience, bringing the need alive through the voices of people on scene.

News or Feature Series (any subject).
1st Place: Alison St. John, KPBS – “Wildfire: Are we ready for the next one?”

Judges’ Comments: Way to be all over the story. In the air and on the ground. Well done!

Judges’ Comments: Very well done in-depth look at an underground culture many do not know about.

Judges’ Comments: Beautifully shot & edited. Great use of interviews to tell the story.

Judges’ Comments: Wonderful use of NAT sound and letting pictures and people tell the story.

Judges’ Comments: Another great investigation by this team using open records to expose a national issue.

Judges’ Comments: Good background research to support content and interviews with people who bring a face to a decades-old issue.

Judges’ Comments: Great use of public records requests to get information to tell a relevant story.

Judges’ Comments: Entry rises to the top because it holds public officials accountable.

Judges’ Comments: This story captures the human toll of Cindy Parker’s crimes as well as her sentence.

Judges’ Comments: The “Awakening” article, from the “Faces of Immigration” series, reads like a travel piece and enlightens readers about the lives of a rarely glimpsed Mexican people.

Judges’ Comments: George lets the circumstances of an obscure event speak for themselves with smart, straight reporting that makes you laugh and keeps you reading.

Judges’ Comments: Insightful column spotlights a trend many do not see.

Judges’ Comments: Just the facts, old-fashioned and solid account of a major fire, what you need to know

Judges’ Comments: An amazing story that I’ve never seen before. Good examination of the emotional impact of a deadly trend

Judges’ Comments: It’s great to see the pop music critic looking deep into how records are sold in SD and elsewhere

Judges’ Comments: In a category with many strong entries, the winner’s entry stood out because she took her readers inside a real estate fraud

Judges’ Comments: This story combines terrific scientific analysis with writing so evocative you feel you’re at the lagoon as whales are surfacing

Judges’ Comments: Saavedra has a knack for finding interesting education trend stories and making them clear and personable.

Judges’ Comments: Clear winner with a biting sense of humor and sarcasm

Judges’ Comments: The best of a very competitive field. Somers’ BioTech 2008 package shows that she clearly knows her beat. These stories are interesting and well written in clear non-technical language. Well done.