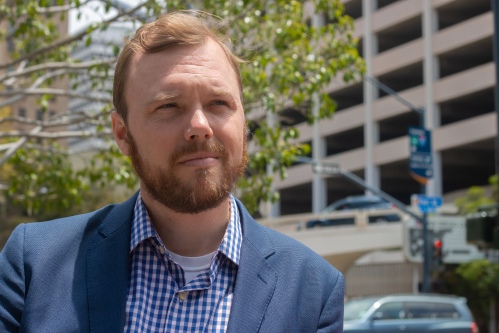 The San Diego Pro Chapter of the Society of Professional Journalists is thrilled to announce our 2018 Journalist of the Year: Andrew Keatts, assistant editor and senior investigative reporter for Voice of San Diego.

Local journalists produced lots of important work this past year, but our board believes Keatts’ work stands out for its depth, diligence and impact. His investigation into a 2016 tax measure pushed by SANDAG, the region’s planning agency, led to a staff shakeup and a state law overhauling the agency’s governance, oversight and auditing practices.

Keatts’ months-long investigation kicked off with a bombshell story two weeks before the 2016 election revealing that SANDAG officials’ $18 billion ballot measure relied on the assumption that San Diegans would spend far more than they had historically, meaning the agency’s projections would be off and that its long list of projects might never get done. Keatt’s tenacious reporting was just beginning.

He later reported that SANDAG staff had discovered the issue a year before the November election but never notified the public or the agency’s board.

Then Keatts reported that SANDAG had also failed to divulge major details about increasing project costs and changes in its revenue projections for a past tax measure, posing more problems for the list of projects it promised to complete.

Keatts’ stories spurred the SANDAG board to order an outside investigation that confirmed what he had reported — and led to the departure of the agency’s powerful longtime head executive and the passage of legislation meant to improve the agency’s accountability. Keatts’ dogged reporting reshaped one of the region’s most powerful public agencies and we are honored to recognize him as the 2018 Journalist of the Year.

Please join us to celebrate Keatts and all of this year’s award winners at our annual banquet on Tuesday, July 17, at Kona Kai. The full list of winners will be announced next week.