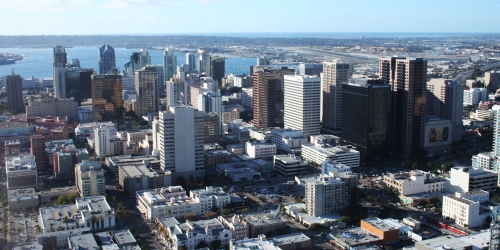 San Diego journalists, celebrate Sunshine Week and the region’s most and least transparent agencies with the San Diego Chapter of the Society of Professional Journalists at Starlite. We’ll continue our annual tradition with our Wall, Window and Sunshine Awards.

More than a year ago, VOSD requested records from all 43 school districts in the county documenting substantiated sexual misconduct by teachers and other school employees who were disciplined or reprimanded in the last decade. Based on state legal precedent, those personnel records met the standard for release but VOSD still faced pushback as it sought them.

VOSD’s efforts to obtain the records – including filing multiple lawsuits – shed light on the secrecy with which school districts handle cases of sexual misconduct involving those trusted to teach and work with students.

McGlone and the VOSD team highlighted previously uncovered examples of how some school districts shuffled problematic teachers from school to school or even paid some teachers to leave while agreeing to keep substantiated misconduct secret from future employers.

In several instances, school districts were willing to hand over records to VOSD but were blocked by teachers and school employees who did not want their behavior made public. Those teachers filed reverse-California Public Records Act requests to try to block the school districts from handing over information to VOSD.

San Diego SPJ’s annual Sunshine Award is meant to honor those who urge transparency in government. McGlone and VOSD labored to obtain records, reported on a number of cases of misconduct and stood up for the public’s right to know who school districts are allowing to teach and work with San Diego kids.

This year’s Window Award goes to Andrea Tevlin and the city of San Diego’s Office of the Independent Budget Analyst.

In her 13 years as San Diego’s IBA, Tevlin has shown a true commitment to government transparency.

Tevlin and her staff are always available to answer questions from the media and frequently venture outside city hall to connect directly with residents.

Tevlin and her staff have gone above and beyond their mandate, and they are shining examples of government transparency in service to the public.

The PUD made egregious errors last year after thousands of city customers complained they were being overcharged for water, ranging from hundreds to thousands of dollars in a single billing period. In response, the department tried to downplay problems by blaming customers and low-level employees for the high bills. But this was only the beginning of what would become a scandalous year for one of the largest public utility departments in the country.

On several occasions, the PUD provided information to reporters and the public that was later proven to be inaccurate. When journalists filed public record requests and asked questions about the city’s $67 million dollar effort to upgrade water meters to smart meters, the department dragged its feet on releasing documents and lacked basic answers on the program’s status. In January, a department spokesperson told reporters the city had no “exceptional or unexpected” problems with the smart meter program. By July, journalists uncovered records proving the program was behind schedule and the department was aware of faulty equipment. Emails revealed PUD Director Vic Bianes had instructed his staff to be “vague” when discussing details about smart meter program and customer service issues.

In addition, recent reporting found the department has not been forthright with the public about how much its ambitious Pure Water recycling project will cost ratepayers.

Rebuilding the public’s trust in the department after such a massive scandal will take time. Some customers were right about overcharges, leading the PUD to refund more than $1 million dollars in 2018 and top officials in the department have since left or resigned, including Director Bianes. We hope the department has learned a lesson about the importance of being honest and transparent with the public it is meant to serve, especially in the midst of public outcry and complaints.